All week, Canberra trainer Nick Olive has been calm and relaxed preparing Single Gaze for the Group One Vinery Stud Stakes at Rosehill.

But the reality of her win on Saturday sent the trainer into a spin as he struggled with the emotion of pulling off what seemed unlikely to some. 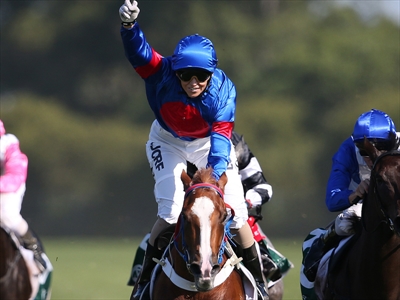 "It's a dream. It's every trainer's dream but to come here from Canberra and do it against the trainers that are here is amazing.

"It is a great group of owners and we'll be staying in town tonight.

"I don't know how we will celebrate, just that it will be big."

Single Gaze's minor placings in two rich Magic Millions races had repaid the ownership group more than tenfold on her sale price of $70,000.

But before Saturday, she probably hadn't won as many races as Olive had hoped she would, going into the race with two successes from 12 starts.

After trying many of the country's big name jockeys, Olive returned to O'Hara, the only one who had ridden her win.

"Kathy is such a big part of this," Olive said.

"She gets on with her so well."

For O'Hara the win was her second at the highest level and one for which she was happy to cop a $400 fine for celebrating a little too early.

Four years ago, O'Hara won the Coolmore Classic on Ofcourseican but her Group One opportunities have been limited.

"It means a lot to me. The 2000 metres was a question but with the blinkers off she did it well.

"She just has so much ticker.

"I have had a bit to do with this filly. I won her first start. I've ridden her mother and it just means so much."

Olive said the Vinery was alway going to be the filly's grand final but he and the owners would give some thought to stepping up to the 2400m of the Oaks in two weeks.

Donna Logan, trainer of the runner-up, has not doubts where that filly heads.

"Brett (Prebble) said she had improvement in her so that's a good sign."

Race favourite Risque ($3.30) ran eighth with her rider Damian Lane saying she didn't seem to run out the 2000m.

Dwayne Dunn had much the same appraisal of her David Hayes and Tom Dabernig-trained stablemate Stay With Me who finished 11th.

"She was disappointing," he said. She is just probably starting to make us think that she doesn't stay."