Robert Heathcote hailed the character and resilience of Buffering after the eight-year-old stormed to a brilliant victory in the Al Quoz Sprint in Meydan, Dubai on Saturday.

Jockey Damian Browne then timed his run to perfection 100 metres from home to finish three-quarters of a length ahead of local favourite Ertijaal with Hong Kong's Peniaphobia in third. 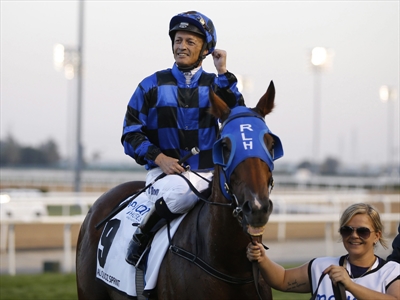 Damien Browne with Buffering after winning the Al Quoz Sprint

Buffering ran a career best 56.34 and a delighted Heathcote was thrilled by the performance of his charge.

"I don't know if I have the vocabulary to describe it but I think a coldie is going to taste pretty good pretty soon," said Heathcote.

"He's not necessarily the fastest horse in the world, but, gee, he is tough. I knew he would be hard to beat once I saw Damian sitting motionless on him halfway up the straight.

"He has beaten some brilliant horses tidily in the end."

Australian mare Ortensia won this race four years ago and Heathcote backed his late blooming gelding to add more Group 1s to the seven he now has to his name.

"He's such a popular horse back home. I think it is part of our Aussie psyche as he was an underdog for so long.

"He has raced against the likes of Black Caviar, Hay List and Sepoy but now he has shown that he is a pretty good horse himself.

"He has taken on the best in the world today and I'm just damn proud of him. He has run a time which is a career best for him and he has done it at the age of eight."

Buffering has been underneath Browne for all of his major wins and the jockey has nothing but admiration for him.

"He's such a warrior. He's getting better with age," Browne said.

"I was worried beforehand that a couple of the others would be a bit slick for him over the 1000m but he was able to jump well and be right up there.

"From there I knew he would be strong at the finish as 1200m is probably his optimum distance."

Buffering will next to go to Hong Kong for the Group 1 Chairman's Sprint Prize on May 1 and is then likely to head to Royal Ascot to ride in the King's Stand Stakes, Heathcote confirmed.