Chris Waller has resisted any prompting to call Winx a champion - until now.

But the mare's win in Saturday's Doncaster Mile has finally convinced the trainer to call her what she is. 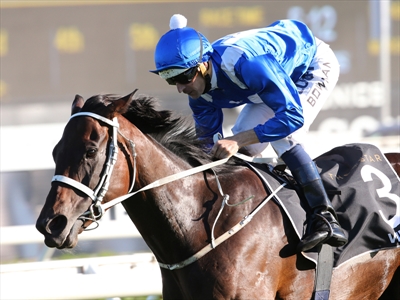 "I thought today was the day she could be beaten."

The punting public thought she was a sure thing at Randwick with Winx the $1.80 favourite, the same price as the last odds-on favourite to win the famous race, Valicare in 1926.

Hugh Bowman took her back in the field from barrier 11 and she looked to be in a bit of trouble as the field straightened up for the run home.

With no clear run, Bowman had to duck and weave and finally got her into a space and she picked up the pace to stride clear by two lengths over Happy Clapper ($13).

Azkadellia ($9) made up many lengths to finish another half-neck third with leader Vergara ($151) running the race of her life to hold on for fourth.

"All I could do was help her through it," Bowman said.

"I was very mindful to get those engines going and that when I did, she'd pick herself up.

"I just had a supreme horse. I could hear the roar as I poked in I just wanted to enjoy the moment.

Waller also struggled, as he has in the days leading up to his sixth win in the race.

"It's been a pretty tough week, to say the least," he said.

"This is a new level for me.

"I don't know how Peter Moody did it with Black Caviar."

Waller watched the race from his usual solitary seat in the trainer's room with the addition of television cameras aimed at him from the door.

"This is the longest Doncaster I've watched," he said.

"I thought she was beaten at the half mile, let alone the 600-metre mark.

"She was going nowhere and I have never seen Hughie have to niggle her.

"She never gets right back there unless we are taking her back from wide draws but that was not really the plan.

"We took on the handicapper and she won."

Wayne Webster, foreman for his father, Happy Clapper's trainer Pat, was one of the first to congratulate Waller while at the same time ruing the presence of Winx.

Happy Clapper had been aimed at the race since he gained automatic entry by winning the Villiers Stakes in December.

"He's run out of his skin," Webster said.

"But I am genuinely happy for Chris and his team."

A big part of that team are the owners, Debbie Kepitis, Peter Tighe and Richard Treweeke, who leave the decisions to the trainer.

The next decision Waller has to make is whether Winx backs up a week later into the $4 million Queen Elizabeth Stakes.

"We'll just look at her over the next couple of days," he said.

Despite the uncertainty, the TAB has tightened Winx from $1.60 to $1.50 for Sydney's richest race.