Lucia Valentina To Race For Another Season

Lucia Valentina will be given the chance to add the Cox Plate to her Queen Elizabeth Stakes victory.

Trainer Kris Lees has confirmed the mare will stay in training in the spring with owner Lib Petagne deferring her stud career.

Lucia Valentina gave New Zealander the second leg of a Group One double at Randwick on Saturday after the Stephen Marsh-trained Sofia Rosa won the Australian Oaks. 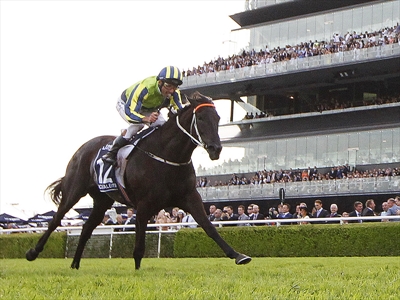 A multiple Group One-winning trainer, Lees described the mare's win in the $4 million Queen Elizabeth as a career highlight.

Lucia Valentina came out of the ruck with a blistering final 300 metres to hold off The United States in Sydney's richest race.

Petagne and his bloodstock agent Bruce Perry had flagged this would be her last season but Lees they had changed their minds.

"They are going to race on for another season so I'm very grateful," Lees told Sky Thoroughbred Weekly.

"She's a valuable broodmare but you can't put a price on winning big races and Lib and Bruce got a big kick out of yesterday.

"There were some thoughts of going to Hong Kong but she will have a good break now and come back for the spring."

Lees deliberately gave Lucia Valentina a month between her Coolmore Classic fourth and the Queen Elizabeth believing she raced best fresh and his judgment was vindicated.

The race was run without Winx after her connections opted not to back her up after her win in the Doncaster Mile a week earlier.

Doncaster runner-up Happy Clapper did however run and his third has put the Cox Plate on his agenda.

"After a seven-day back up it was a good run," trainer Pat Websters son and foreman Wayne said.

"I wanted something to take us into the race a bit sooner than what happened.